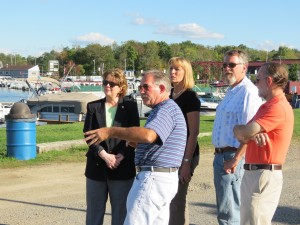 The officials reviewed ideas to create a new walkway between Ice House Park and Fireman’s Beach to enable access, including handicap accessibility, from the park to the docks and beach area. To be included in this project will be the construction of additional docks and refurbishment of the beach.

“There has been a tremendous effort to upgrade the recreational areas and improve tourism in the region,” said Senator Brooks, “I was pleased to join with local officials in promoting these and other projects to Secretary Dunn.”

During the recent visit, Senator Brooks and Secretary Dunn also visited Tuttle Point with Pymatuning State Park Director Dan Bickel to discuss ways in working together to reopen the campground and beach. They recognize the important role that Tuttle Point holds for many of our families as well as in the local economy.

“Camping and swimming at Tuttle Point was a summer tradition for many local families, while also serving as a valuable economic resource that attracted a substantial number of visitors to our area,” said Senator Brooks.

“The senator’s district is blessed with a wealth of natural resources and she showed her commitment to them by also leading us to the shores of Conneaut Lake where a DCNR grant could possibly expand public access, and later joining us at Maurice K. Goddard State Park, where a tremendously popular all-purpose trail was dedicated in honor of John C. Oliver,” Secretary Dunn said.

Senator Brooks said, “I am very excited and appreciative that Secretary Dunn spent the entire day in northwestern Pennsylvania seeing firsthand what we have to offer with our great recreational areas and resources. I look forward to continuing to work with Secretary Dunn on these and other projects that will enhance the quality of life and recreational opportunities for our region.”