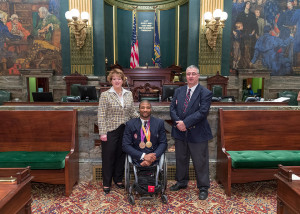 HARRISBURG – (Jan. 24, 2017) After meeting Paralympian Trevon Jenifer last fall, Sen. Michele Brooks extended an invitation for him to visit Pennsylvania’s state Capitol and, on Tuesday, she had the distinct honor of introducing him on the Senate floor.

“Trevon Jenifer, who personifies the word ‘champion,’ has grit, strength, skill, and a persevering attitude that not only wins games, but Olympic gold medals,” Brooks said in her floor remarks.

During the Paralympics in Rio de Janeiro this past September, Trevon and Team USA Basketball defeated Spain by a score of 68 to 52 to capture the nation’s first gold medal in this sport since 1988 –almost 30 years ago.

After graduating from Edinboro University in 2011, Jenifer and his fellow Team USA basketball players won a bronze medal at the 2012 Paralympics in London. Determined to turn bronze into gold, four years later, they went on to capture the gold medal in Brazil.

He is the first Edinboro University graduate to earn a gold medal, and is currently an assistant coach to the university’s wheelchair basketball team.

“It gives great credit to Edinboro University for their investment in this basketball program, which helped shape an Olympic gold medalist, and it’s exciting to hear that the university is hosting the Boro College Tournament on Feb. 3 and 4, with teams that include Canadian U-23, University of Wisconsin–Whitewater, University of Missouri and University of Illinois.”

Mr. Jenifer was also honored in the state House of Representatives by state Rep. Ryan Bizarro.

“Trevon is a glowing testament to the values of a strong work ethic, sacrifice, passion, and love of family while serving as a shining example for those who aspire to greatness,” Brooks said.